by admin in Flowers |

David Austin passed away this month and Floral Expressions would like to express our deepest sympathies to the Austin family.

David Austin was the best known breeder of roses in the world.  While David Austin became interested in horticulture as a teenager it wasn’t until later in life that he made his mark on the rose growing industry.

One time David was having dinner with his wife at a restaurant a rose seller walked in with a basket of single wrapped roses for sale and proceeded to offer them to the couples at each table. David , being a rose breeder refused to buy a rose, but his wife insisted and he relented. Upon receiving the rose, Davids’ wife proceeded to put the bloom up to her nose to smell the scent. Unfortunately, there was no scent and David decided to develop a new variety of rose that could be enjoyed visually as well as through olfacation. The resulting variety of roses had been named after David Austin and are available all around the world and are enjoyed for their beautiful scent.

David Austin bred over 230 varieties of roses and being a humble man he was not too keen about having the roses named after himself. Instead the term English rose has been synonymous with David Austin roses. Some famous varieties include Claire Austin Rose, Olivia Rose Austin,  Queen of Sweeden, Emily Bronte, Sweet Juliet, and many, many more.

While some wild growing shrub roses have a fragrance, David was successful in cultivating varieties that are long lasting when cut, have long, strong stems and a large variety of colours and most importantly repeat flowering nature. Our industry will be eternally indebted to the man often referred to as the Godfather of the English Rose. 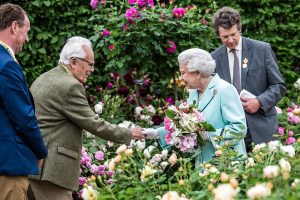 Previous Flowers for Christmas Next Merry Christmas from Floral Expressions